Posted at 11:04h in The People's Palace of Possibility by Admin
Share

Like many of us across the world, this spring all our plans fell apart. The first national tour of The People’s Palace of Possibility was all booked in and we were preparing to hit the go button. We had a dream team of artists and venues from the Highlands to London lined up. Then – things changed. Unprecedented, tragic for many, suffocating and isolating, with wide reaching and lasting repercussions for all of us.

For a long time we have been told that things cannot be different, that radical alternatives to the status quo are naïve, economic suicide or simply impossible. And, although the changes we’ve seen this year have been tragic and harrowing – they have also shown that change is very much possible. I am not saying that this could be understood as a silver lining to the horrors of this pandemic, there is something grotesque about describing a silver lining on a cloud so dark. But for worse, and perhaps for better, change is afoot.

…we have this capacity to – this amazing capacity to generate pictures of the future. Let that pull us forward rather than be stuck in the old stuff. 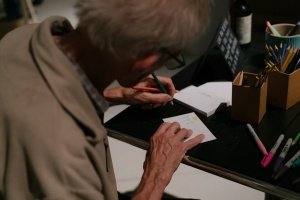 The People’s Palace of Possibility is about dreaming up alternative futures. Audience members become Palace Citizens, tasked with radically re-imagining of the world. How could things be different? Do you feel more hope than fear, or more fear than hope? Why? If COVID-19 and its ramifications have shown us profound negative change, what might profound positive change look like?

All in all, within The Bare Project, we felt that the need for a Palace of Possibility was greater than ever just now. A Palace which would do democracy very differently than the one in Westminster. In this Palace, everyone can be a citizen. In this Palace, the most outlandish and surreal visions of the future can sit alongside practical policy suggestions – because we recognise that both play an important role in creating change. In this Palace, we build utopias, and recognise that a real utopia is never complete and needs constant tinkering. The People’s Palace of Possibility is a growing archive of visions, imaginings, fears and daydreams from people all over the country. At its heart is the belief that we need these visions for change, and that the exchange of these visions is a crucial part of democracy.

So, we decided to open the palace doors early. With the support of The Centre for Understanding Sustainable Prosperity, Arts Council England, the Albany, James Blakey and The University of Keele, we will be reaching out to 120 new Palace Citizens in Sheffield, Doncaster and Deptford. These Citizens will receive a series of packages in the post, which unfurl the mysteries of the Palace, invite tiny acts of resistance and provide opportunities to contribute to the growing Palace Archive.

If you live in one of these places, we would love you to take part! If you have a Sheffield, Doncaster or Deptford/New Cross postcode and you would like to become a Palace Citizen, get in touch with us: palacecitizen@thebareproject.co.uk. Please note, there is limited availability and places will be offered on a ‘first-come-first-served’ basis.

If you don’t live in these places, but want to be a part of this in the future, it will be back! Sign up to our mailing list here to be the first to hear about it. The Palace Archive will be available for anyone to view online from August, follow us on Instagram (@_thebareproject) or Twitter (@TheBareProject) to get the link when it goes live.

The Bare Project have received emergency funding from Arts Council England, which we are incredibly grateful for. As a company with no permanent staff, we are all freelancers surviving project-to-project, and without this funding we would not have been able to support all our creatives and associates through this crisis.

We are acutely aware that many deserving organisations did not receive funding when they needed it, and we desperately hope they are still able to exist on the other side. We appreciate the responsibility that comes with this grant, and are doing our best to use this money for good – to keep as many other local artists as we can afloat, to support an intern, to provide creative activity for communities and to enable our Artistic Director and Producer to continue to contribute to local talent development networks like Making Room, and social justice causes like the Sheffield Climate Alliance.

Inspired by the brilliant folk at Milk Presents, we have summarised below what we’ll be using the public money for, and would be really happy to answer any questions too – just email: linda@thebareproject.co.uk

Our activity over the summer is costing significantly more than this – approximately £18,432 – but is also kindly supported by funding from The Centre for Understanding Sustainable Prosperity and a research grant from The University of Keele.

This money will be spent on:

days for our Artistic Director

days for our Company Producer

days for our Designer

days for our Web Designer

days for our Sound Designer

days for our Actor

days for our Writer

days for our Dramaturg

days for our Illustrator

At The Bare Project, everybody is paid the same: a day rate of £158 per day, in line with ITC Guidelines.